How to Finally Overcome Your Fear of Speaking Spanish

One of the biggest obstacles when learning Spanish is being afraid of actually speaking Spanish.

In the beginning, speaking a new language can be uncomfortable, awkward, and scary.

As adults, we’ve learned to avoid those feelings like the plague.  So when we are asked to voluntarily put ourselves in a position that will evoke all of those emotions at once, our instinct is to run the other way.

The fears of sounding silly, being unable to keep up with the fast pace of native Spanish speakers, or saying the wrong things are real barriers to speaking Spanish.

All of those anxious emotions actually block the language production area of your brain and make you feel like you can’t speak.

That is where the “I understand some Spanish but I just can’t speak it” line comes in.

Here’s a little secret—that’s a lie.

If you know some Spanish words, even only a few, you can most definitely speak Spanish.

You just have to tackle your fear of speaking once and for all.  Here’s how:

A great way to practice your new phrases and vocabulary without the dreaded pressure is to practice alone.

Talk to yourself in the shower, as you get ready in the morning, or in the car during your commute.

You are not looking for perfection. You are just getting your brain, mouth, and ears used to forming and hearing new sounds.

It will feel awkward at first, but that’s OK. The point is to keep practicing until it doesn’t.

I know your mom told you that only crazy people talk to themselves, but we’ll keep this our little secret.  No one else has to know, and by the time you start talking to other people the words will flow more naturally.

You are not going to start out with a heated debate in a room full of Spanish speakers.

Begin by copying basic sounds, words, and phrases.  Learn how to say words that are common in conversation, and that you find yourself saying often in your native language.

Gradually those phrases build up to sentences, and sentences become conversations.

Remember to be patient with yourself and set realistic expectations.  Fluency doesn’t happen overnight, so cut yourself some slack and be proud of your progress, no matter how slow it seems.

Once you feel like you’ve got a few basic phrases down, force yourself to use them with someone else.

You may have a friend that speaks Spanish who doesn't mind chatting with you.  If not, try to find a language exchange partner or language tutor.

The first few times you speak Spanish with someone, no matter how much you have practiced on your own, things will probably come out a little jumbled.

If you are not well understood at first, don’t be discouraged. Your nerves are getting in the way.

Eventually, those nerves will back down and conversations will become easier.

Consistent practice speaking Spanish is one of the most important factors in shedding your fear for good.

Make a point to practice daily, even if it is only for a few minutes. Don’t waste all your previous effort by letting your knowledge get rusty.

Intentionally place yourself in new situations where you will have the opportunity to speak Spanish and challenge yourself on a regular basis.

The only tried and true way to overcome a fear is to make yourself confront it time and time again, until it doesn’t bother you anymore. Speaking Spanish is the same way.

The more you do it, the easier it will become.

5) Have Something to Talk About

Most of your conversations will be almost identical when you meet someone.  You will have to know how to introduce yourself, and ask and respond to some basic questions.

Be prepared by focusing on vocabulary and expressions relevant to topics you are interested in talking about.  This is a far more interesting way to study Spanish in general, and will help you immensely in holding a conversation and staying motivated.

For those days, remind yourself of why you began this journey in the first place.

What is your end goal?

Whether you are sitting in a cabana by the ocean saying “otra margarita por favor” or landing a huge sale with one of your clients in South America, use your dream to help you fight through the discouragement.

See yourself as a fluent Spanish speaker.  One day soon you will be effortlessly conversing with your new Spanish-speaking friends while the monolinguals stare with envy

It’s coming, and the more you practice the sooner that day will be.

I recently did a workshop on How to Overcome Your Fear of Speaking Spanish.  For a limited time, you can watch the replay here.

In the next article in the Conversational Spanish Series, we will walk through how to have your first conversation in Spanish, step-by-step.

Get your Free Spanish Conversation Guide 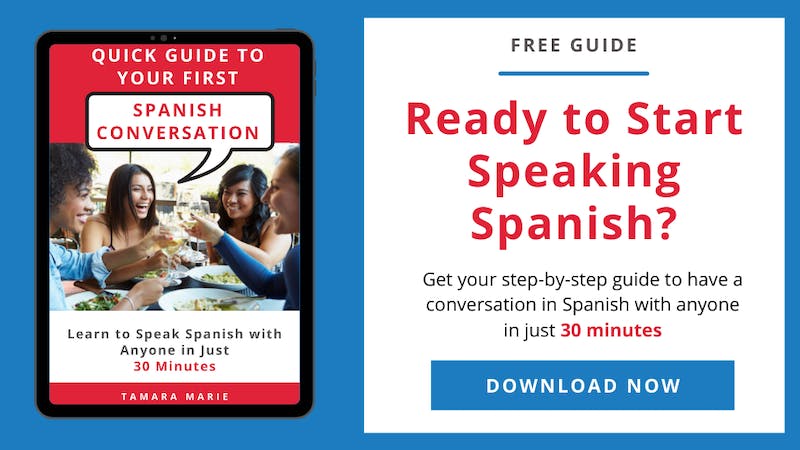 Success! Now check your email for your Spanish conversation guide...